She describes her new album

“For the last two years, I’ve been working on an album called Red. I called it Red because of the tumultuous, crazy adventures in love and loss that it chronicles. In my mind, when you experience love that’s fast paced and out of control and mixes infatuation, jealousy, frustration, miscommunication, and all of those lovely emotions…in retrospect, it all looks red.”

Alright, Taylor Swift did a live cast web chat and she revealed her new album and single for her fourth album. The live chat was held at Andrea’s home (Taylor’s mom) in Nashville. 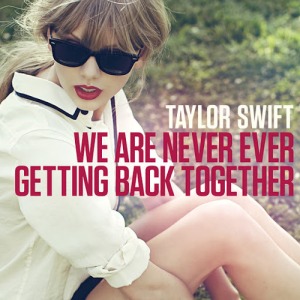 The fourth album dated to release on October 22 and the album title was, RED and her new single was “We Are Never Ever Getting Back Together”. In line with her album title theme she wore a red dress with matching ruby lips that makes her more gorgeous. She unravel the red sheath beside her which was the Album Cover.

The album cover was a profile of her face with her ruby lips and wavy hair which became her new look right after the Speak Now World Tour. This coming fourth album was created and conceptualized by Taylor for two (2) years. She even said that there will be 16-song full of red shades that reflects in her life from the past two years. The 16 songs were chosen from 30-35 songs and she only picked the ones that reflects with the RED album theme.

Swifties are all excited with Taylor’s new album. Taylor even said that in this coming album Swifties could expect more co-writes and some duets from her song artist heroes list. One of them was Ed Sheeran with their co-write and duet, Everything has changed.

Taylor invited some of her lucky fans on the live web chat personally and even entertain some questions from her fans online at Google+ hangout.

According to her lucky fans, they had some tour in her apartment and ate dinner and she even played some of the songs that were included in the album.

Taylor Swift is trending worldwide and everyone loves her new album and music. Everyone was commenting with her up-beat song and congratulate her with her success.

On itunes, she beat Lady GaGa for being #1 on all genres and since the new single was release on itunes it topped all the way to #1.

What do you think about this article? Please leave some message. | Thanks! Cancel reply